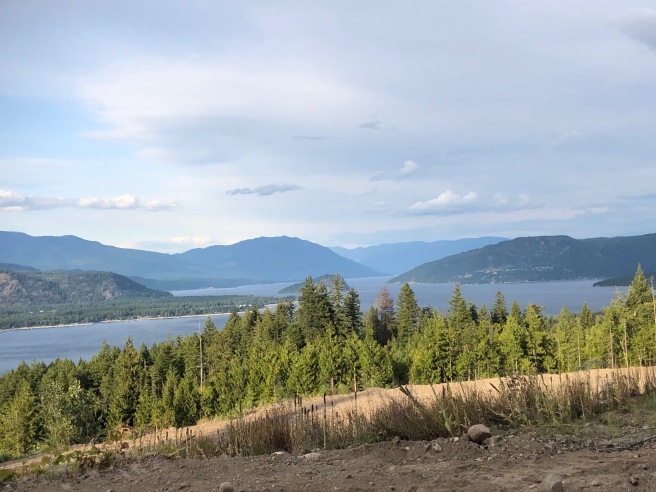 Well our most recent obsession is a gravel pit we have purchased on the south side of the Shuswap lake.  I should IMMEDIATELY add that it is no longer a gravel pit, but OUR homestead.

We have been looking for a new place to live for a few years, wanting to be a bit closer to “amenities”, like doctors, banks, grocery stores,  and insurance companies. ( you have no idea what a pain it is to have to physically go to another town to renew your automobile insurance.  But also …..now to our new grandson Talon.

Back to the gravel pit part…..( also called a “mine”)…… We have learned a bit about how it all works.  I guess the fellow who has hauled all the gravel out of here for some time, first of all had to take all of the topsoil and place it in a certain spot, so that when that mine (gravel pit) was decommissioned, … they would then take all of that top soil and put it back onto the property.

We have almost 9 acres of which at least 5 acres is usable land, so we have saved lots of large garlic with the plans to plant them in the fall.

We took ownership today, but it was great to be involved during the final stages of the gravel pit such that instead of spreading the top soil every where, we had them just put the top soil in a designated area where we are going to grow Garlic… and the rest of the place is gravel.  IE no weeds…. or mud.

So there is of course no house here, and we have sold our house as of the end of September…..

So it is great that we have grown so fond of living in our motorhome in the winters, because it seems like we shall be living in it for at least a year now.  At this stage, at least, I am quite excited, as I just love living in the motorhome, live is “simpler” than living in a house.  Who knows how it will feel a year from now

However THIS is our new adventure, and this is where we begin.

Much love, Janet, Ken and Tucker.