Back when we were in Kingman, Ken came around the back of the rig, while filling up with gas, and there was a guy under our motorhome. EEEK.. Well it turns out that he had been following us and noticed how dreadful our shocks were. He just HAPPENED to have a mobile “replacing shocks” service.
Now although we were very leery, we also had been wanting to change the shocks and it is always extremely complicated to get anything done on our rig (as you will see in this story)…. so we went with it. I got the cash and insisted Ken stay with them the whole time. (after the disastrous brake situation where the guy put one of the callipers on wrong).
So we pulled into the parking lot of a mall, and they got the correct size measurements and one of them went off to purchase them. He came back and within an hour we had brand new shocks on the back of the rig, and it all went well.  Kind of funny, as we were driving away, we could see them following another older motorhome…

This blog does not have any associated pictures so I thought I would intersperse a few from the gem show. This is tigers eye from Australia. 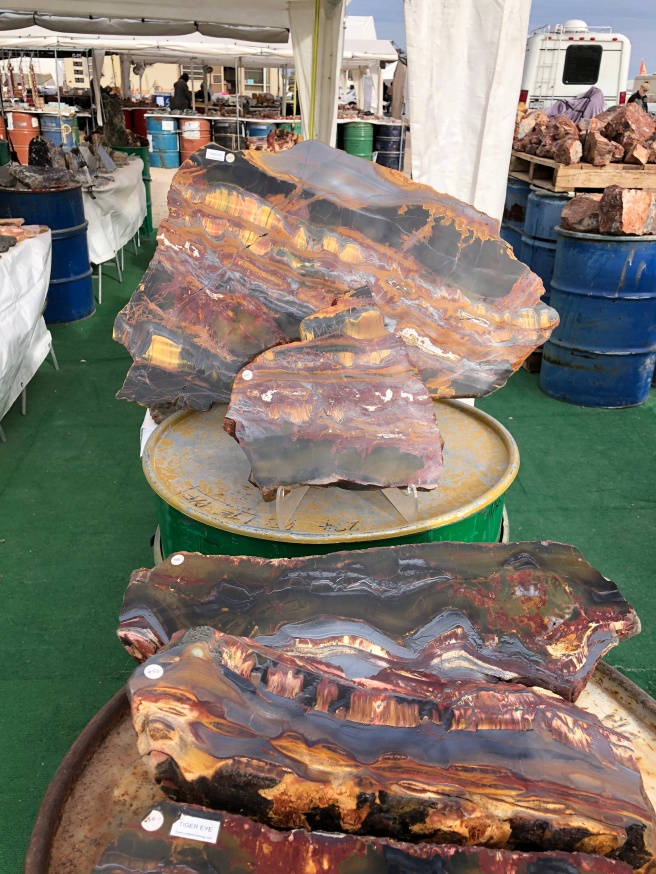 SOOOOOO then we decided we wanted to get the shocks replaced for the front. Ken figured he would do it himself.
We were in Parker AZ. Ken found an online ad for a store in Parker, and gave the guy the measurements, and he said that they would be in the next day by 4 and the shop closed at 5.
We went up to Lake Havasu for the day to visit friends and rushed back to Parker in time to get the shocks. We could not find the store, and so Ken phoned again and turns out that the store WAS in Lake Havasu city, where we had been all day. SHEEsh. So then he figured what the heck, and decided to drive up the next day to pick up the shocks anyways (about 35 miles..) He got there and they had ordered the wrong size.
So we hung around another day, deciding to really solve this problem and once more they got the wrong size in. So we decided to give up on this place… and  move on down to Quartzite. He went into a shop there and ordered the part and was quite specific….. but once again the wrong park came in.

This is a massive ?? Jasper piece from Australia, the rocks that come from these far away places, they ship them over.

Finally finally … he resorted to the OLD FARTS forum, and one of the guys “BILL” coming to the Safari rally ordered the shocks, picked them up in Havasu and brought them to the rally. They were the correct ones. Ken had a hard time getting one of the old ones off and so “BILL” had the compressor tool to take it off, Ken got them off, put on the new ones and now we have 4 new shocks. So the morale of this long story, is that sometimes…. things that seem pretty weird, work out.

This some of the jewelry  that our friends from Hawthorn AZ their shop is called ROCK CHUCK, have made. They do the mining, cut the cabochons AND make the jewelry.  These pieces are a mixture of the various gems they mine. Turquoise, and varicite are the two I recognize.

We have officially said goodbye to Quartzite and are heading up to Havasu to drop off the rental car.  It will be great, because it is not much fun driving in 2 vehicles, Tucker gets lonely, he IS a 2 person dog, AND it has not been very useful. We WILL work out something different next year.