We have finally found what we were looking for, after cross referencing  maps from 3 books and also a little help from google earth, we found A road going WEST from Palo Verde and the destination was Pebble Terrace.  The books said “desert varnish covers all the rounded agates, shaped by water.”  “Water action has left the area looking like the tide went out and never returned”  It DOES look like some of the Oregon Coast beaches in the winter when the rocks get exposed.

and there are the tell tale beer bottles (broken)

The agates here are a bit harder to find, but when you find them, they are already polished. The ones on the beach are shiny when wet, but these are already shiny when dry. 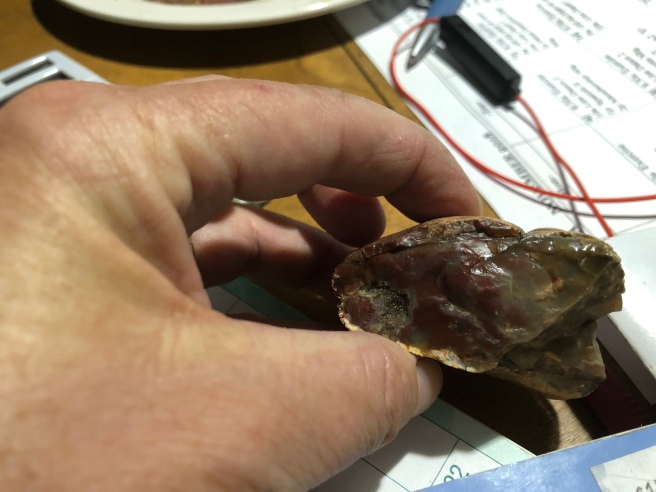 We have joined the lapidary club in Quartzite, it took awhile to join. We had been in town for a few days, and a week ago thursday, ken went down to see whats what… He got there about 9 am, and was told that you had to do the orientation before you could do anything there. He asked, “when are the Orientations?”, they said “every Thursday morning at 8.”  So we waited all week to go for orientation, and did it Thursday morning at  8. But then we learned that it was only the general orientation, we needed the lapidary orientation, and when is that??? Thursday at 9 AM, and likely booked up… _(&_(*&_^&. SHEESH. Well in the end we did get it and learned all about how to use the machines, a few of which we already have at home. We have not made it back yet because they are closed on weekends.

The area we are in is all about Cotton, among other crops. Very agricultural south and west of here. This really is the healthiest we have ever seen it. We have heard it requires more herbicides etc than almost any crop…. perhaps best not to hang around 🙂

Well this is Tucker, and we have identified 2 situations where he becomes VELCODOG.

“Velcro dog” is when he sticks to us like GLUE, usually wanting to be in physical contact or close at all times.

#1 situation: Teddybear cholla. A cactus that sends out little grenades that lie all over the ground. When you step on one of them with your paw it sticks in and then when you instinctively try to remove it with your mouth (if you are a dog) it stabs you in the mouth.   This year we had thought we were going to be ahead of it all and buy the booties that go up the legs. We thought that the best place to get them would be down here. THEN we found out that the best kind actually comes from Canada, and the stores rarely sell them for larger dogs.  So we will likely order then when we get home. We have been doing pretty well this year by avoiding these kinds of places and finding spots for him to hang out that have been cleared of the little “land mines”

Velcro dog situation #2: YUMA PROVING GROUND.  The Yuma proving ground is where bombs come from all over the country to PROVE themselves. To “prove themselves” they likely need to be able to cause as much destruction that they possibly can in places like Yemen, and Gaza.

So if you can imagine 500,000 rounds a year, translates to ~ 1300 a day?? :^)  This whole proving area lies just south of all the places we have been hanging out. So we can often hear these bombs going off, and we are pretty sure that Tucker hears many more than we do.  So when he gets clingy, we know what he is hearing. This picture is taken just a few hundred yards outside of the proving grounds border. The beautiful Castle dome mountains.

The drive home for the tired pup……

Much love to all, thank you for following our obsessions….