What a difference a few days makes.  We were in California city on Monday…. 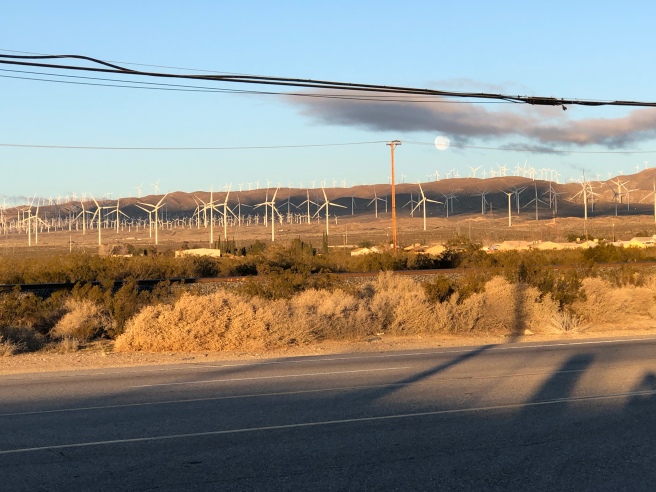 EEEEEK what happened?  This is Laytonville, I think……. The day  was all blurry, we left Clear Lake in a snow storm, something we have not actually ever had to deal with in our motorhome.  So at this point we pulled over to let the temp warm up a bit. 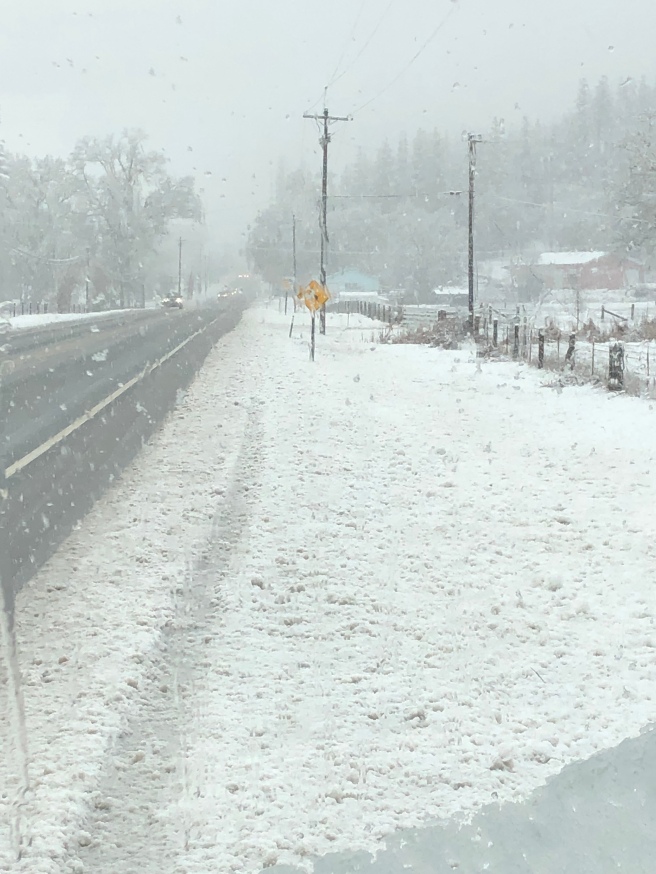 Interesting, we pulled over and had lunch and this truck pulled up in front of us and came to see if we were OK…. What a nice guy, his name was Dylan.

The Redwood forest in a snow storm, lots of trees down. However I think we made a good decision to wait a little while and then head out. Fortunately all of the downed trees were cleared by the time we got there. 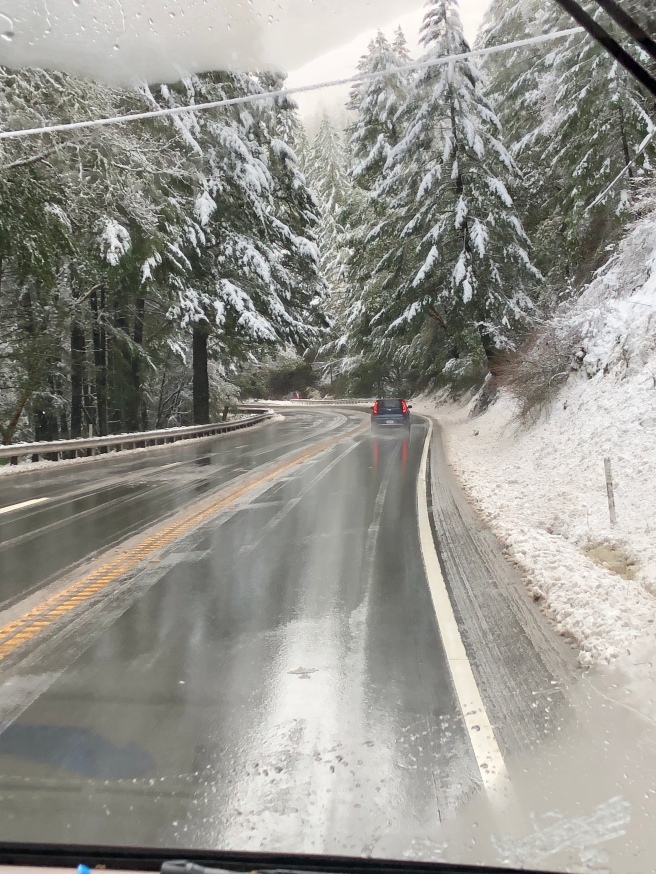 And then Happy dog time, 3 days of driving, he just could not believe his luck. 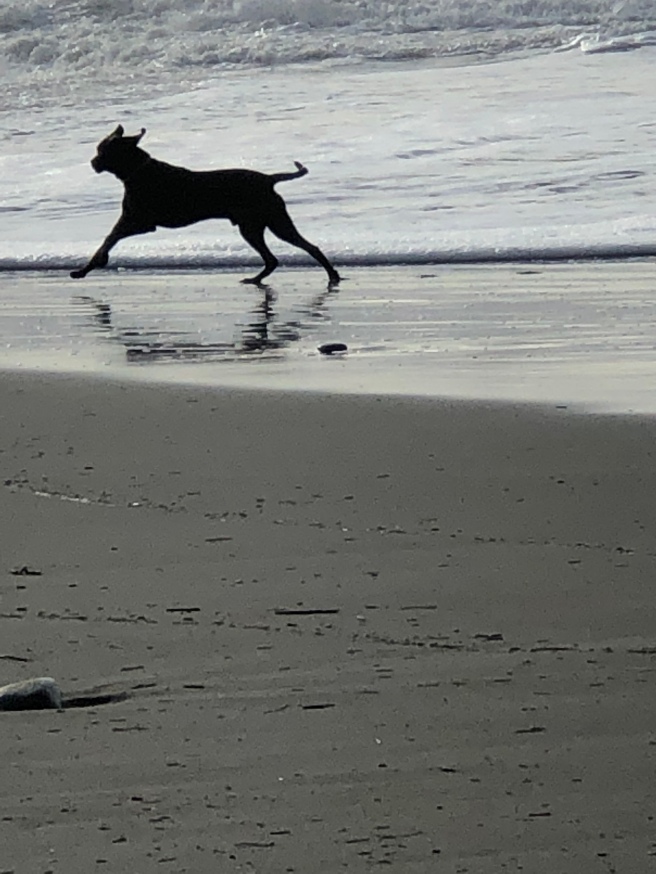 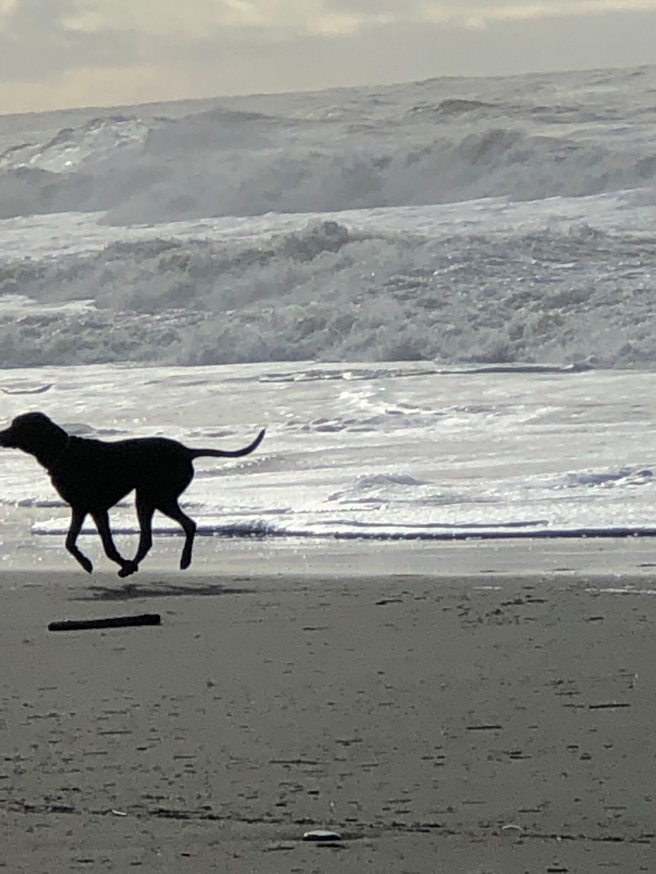 We are finally back to the pacific ocean, and it feels like home.  Something very cool about a winter morning after a big rain. It somehow seems brighter, the waves are always bigger, and the air smells…. well… like the ocean.  We are in Ferndale, the Victorian town just south of Eureka, Ca.  It is where many movies have been filmed, most noteworthy is the Majestic, a John Carrey movie that is about the actual town, a guy shows up in town who closely resembles a soldier from that town. (seems to me the soldier died…??  ) Perhaps need to watch it again. The town is actually about 5 miles from the ocean. This is the lagoon alongside the ocean, I gather the area all floods after these big storms. 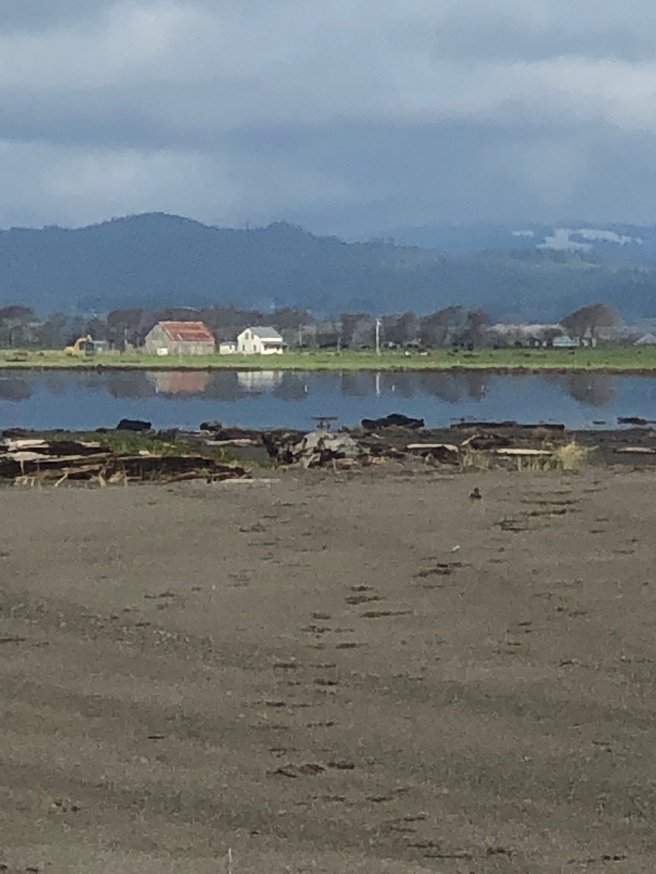 Quite a Victorian little town. 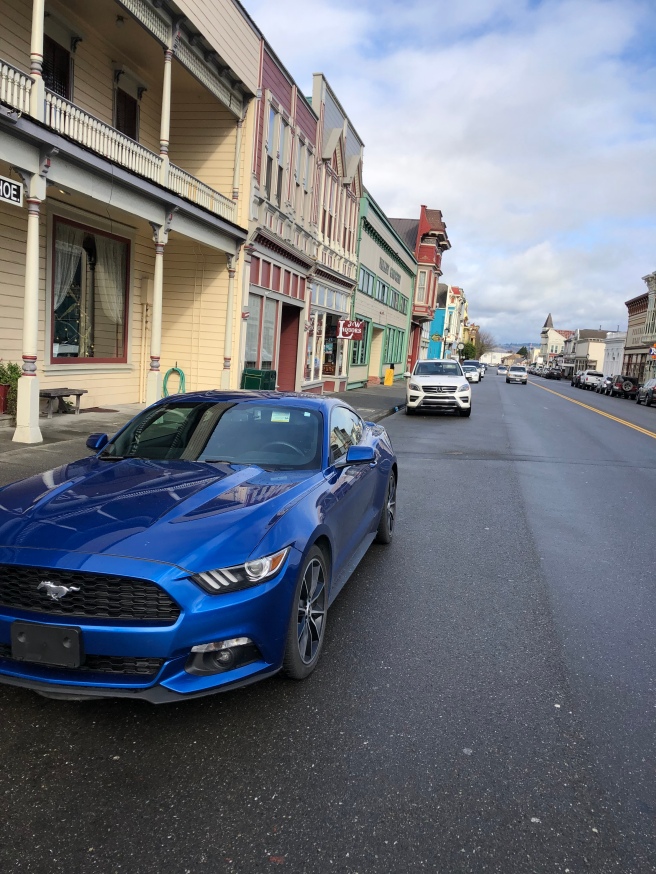 The shops are mostly artisan shops, with interesting Driftwood “instruments” 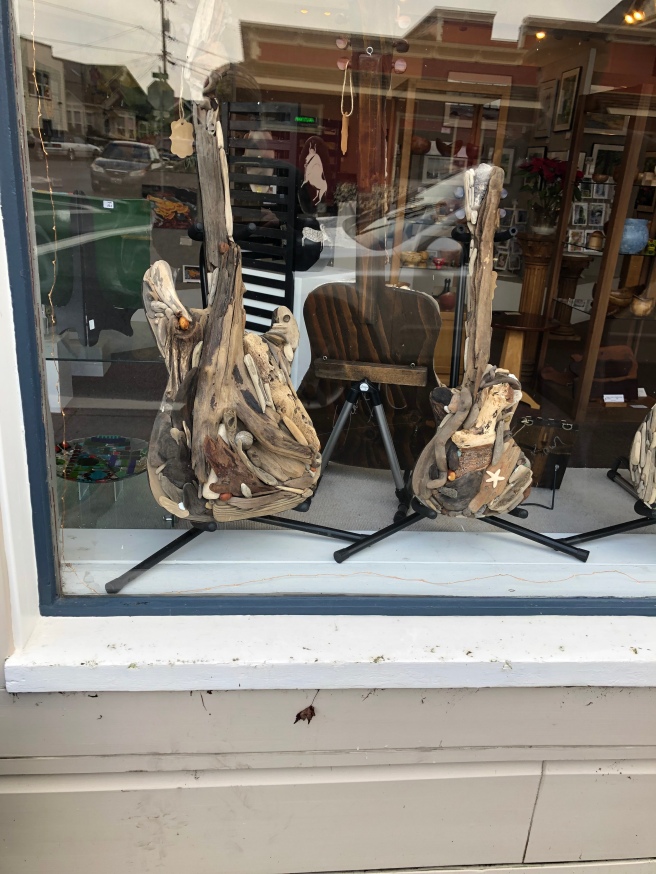 The next part of this blog is about a new years revolution I have joined……… WARNING, may be disturbing for meat eaters……

Over the past many years we have been eating less and less meat. A few years ago we were down in Bandon, and a friend of ours had had a heart attack in the 6 months preceding our visit. He was only 52, and so him and his wife got researching all of this stuff to do whatever they could to make certain this would not be a life shortening event.  They discovered Dr Esselstyn’s program for prevention and reversal of heart disease.

“In 2007, Dr. Caldwell Esselstyn published Prevent and Reverse Heart Disease. Based on his twenty-year groundbreaking nutritional study, the book offered a revolutionary program to stop, treat, and even reverse heart disease. Dr. Esselstyn convincingly argues that the key to abolishing heart disease is eliminating meat, dairy, oil and nuts (with minimal salt and sweeteners). With plant-based, oil-free nutrition even the sickest patients experience a drop in their cholesterol, a boost in their energy, and see their heart disease and related symptoms reverse. In Dr. Esselstyn’s original study, compliant patients continue to thrive — some are now well into their 80s.”

When our friend (who had had the heart attack) described the diet, we really did not think we could live without cheese. We took  NO FURTHER ACTION at that time

However in the past year and a half we have discovered that both of us are lactose intolerant (relatively), and have moved away from milk to the cashew milk that I have described in this blog (about our new machine and that we make our own milk).  We have continued to eat cheese and take lactaid, or just ”live with” the cramping we get from eating cheese.

This New years I have joined a revolution…… to go to a whole food plant based diet. Also no oil, or sugar.  They also suggest no salt….. but there ARE limits.  I am quite taken by the site https://www.forksoverknives.com. I also learn a lot from their facebook page. I buy their magazine in the stores and try out lots of their recipes.

So this diet is essentially vegan (but that has  always seemed  like a negative word) I like “plant based” better.

So all fruits and vegetables are OK, seeds and nuts in moderation, and only bread and pasta that are whole grain.  Esselstyn’s cardiac diet (which goes beyond plant based) does not allow for nuts.

I guess there are many reasons one might pursue this sort of diet.  Our friend chose this diet for his health concerns, and he has told me that subsequent testing they did on him DID show evidence of  a reduction of plaque (which is what tends to lead to heart attacks). If you would like to read a great medical article about this it is here. esselstyn article

My main reasons come largely from my concerns for the animals, and the dreadful lives many of them live, so that I can eat meat.  The full and unadulterated story of dairy, is not really a pretty image either.  Other reasons  ….. the environment. I know that many disagree with this, but I believe if people ate less meat, and dairy, it would help with our climate crisis.  In the news you hear about all of the Wisconsin dairy farms going bankrupt and they blame it on the trade wars, but you only have to look at the milk section in stores to see the OTHER big issue. A large portion of milk in stores nowadays is non dairy milk.

It has been fun to embark on such a big change in life, and learn more about how to survive without cheese. The real biggie here is nutritional yeast. You can make a great cheese tasting sauce for mac and cheese with nut milks and nutritional yeast and dijon mustard. We have continued on with our chips and gravy at least once a week.  I have been making light hummus with a can of chick peas, a can of artichokes, small amount of tahini and the nut pulp from my nut milk making, and lots of garlic.  We normally have cheese in our sandwiches at lunch every day and we are using the Hummus instead.

I am sure that there are some copyright issues here, but this is a great alfredo sauce using cannelinni beans. (from the forks over knives magasine) It was delicious. 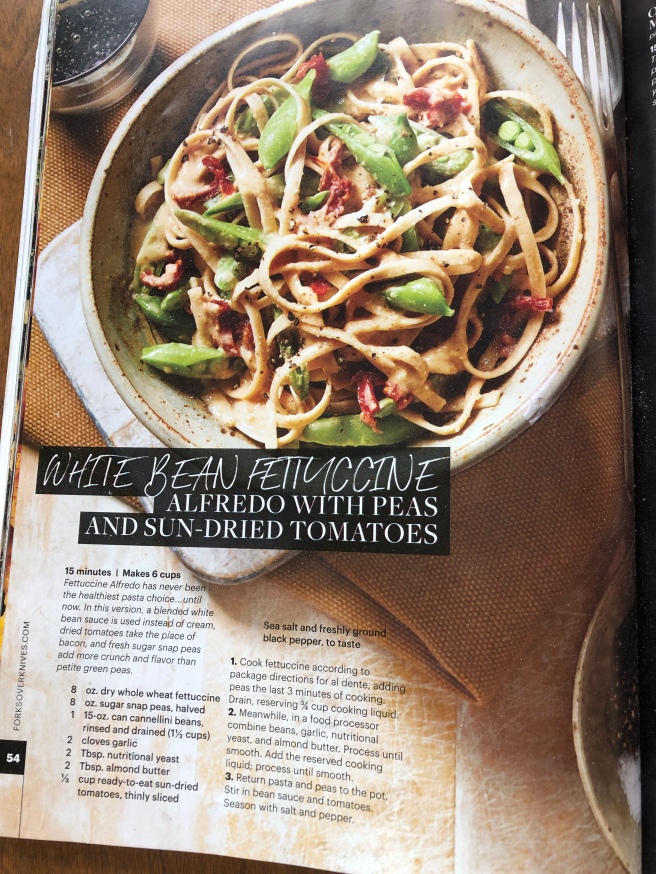 Perhaps on some future blog I will try to start writing some recipes out.

So we are just a few weeks short of being home, it is VERY cold there and we hope that the weather up there smartens up a bit before we get there. 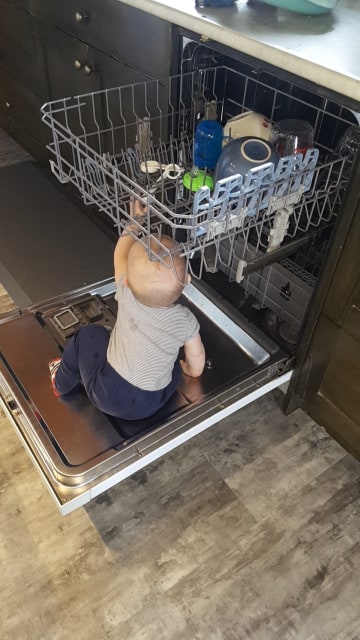 We are especially excited to see this little guy….. he apparently is already helping with the dishes….🤔🤔🤔     Funny thing, I do NOT think he got that from his dad…..

Much love to all, Janet, Ken and a happy happy Hound dog Tucker.

2 thoughts on “The Pacific ocean…”