Do you ever worry when things are going too well?  Well I have had an uneasy week, that has been going FAR TOO WELL. Make no mistake, it has been an incredible week.

We have spent a month worrying as to whether weather would allow us to hit the road when we wanted to, having left it so late in the year. I managed to get out of my last shift at work, so we could head south today. Every year we have headed south, thus far, we have spent cleaning up water, with leaking roofs, leaking wheel wells, leaking toilets, burst pipes, and this year, Ken has obsessively made certain that EVERYTHING was going to work well. I was getting very uncomfortable with how things were going.. Just too good. SOMETHING had to go wrong.

Well everything was according to plan,  great weekend medical conference at sparkling hill resort in vernon. 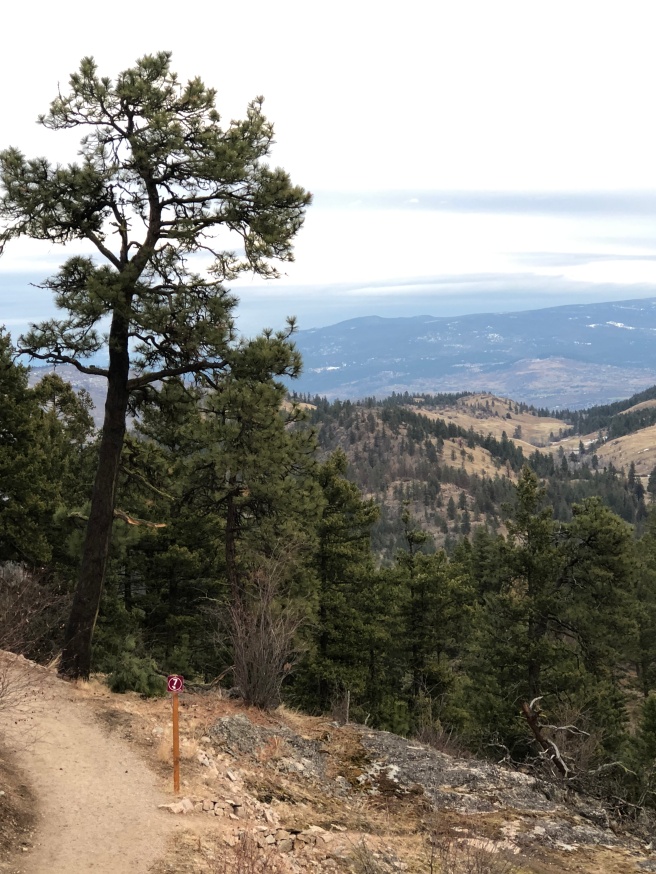 , we hit the road to spend night at Dylan and Sarah’s (our son and daughter in law)in Kamloops. Great evening…..

Then it happened, we decided before we left kamloops to fill up our tanks with water. There was the usual filling noises, but then there was a different sort of filling noise that sounded more like a spray, and presto…. the motor home was once again rivets of water running down the floor.  Then soaking towels hanging all over the place and heaters trying to dry the floor. SAME OLD SAME OLD.  Turns out this obsolete ice maker in the motor home is still connected to the water, and  I guess the pipe must have broken when it got cold a few weeks ago.  It was great that we FOUND a problem, and Ken was able to fix it.

We both felt quite relieved that FINALLY something had gone wrong, and that it was fixable. So now our trip is back to usual and we can stop worrying about when the floods are to begin.

Ken has made so many changes to “taj” the motorhome this year, the biggest being installing a range stove/oven.  UP until now we have only had a 2 burner stove top, that worked very poorly. NO OVEN. 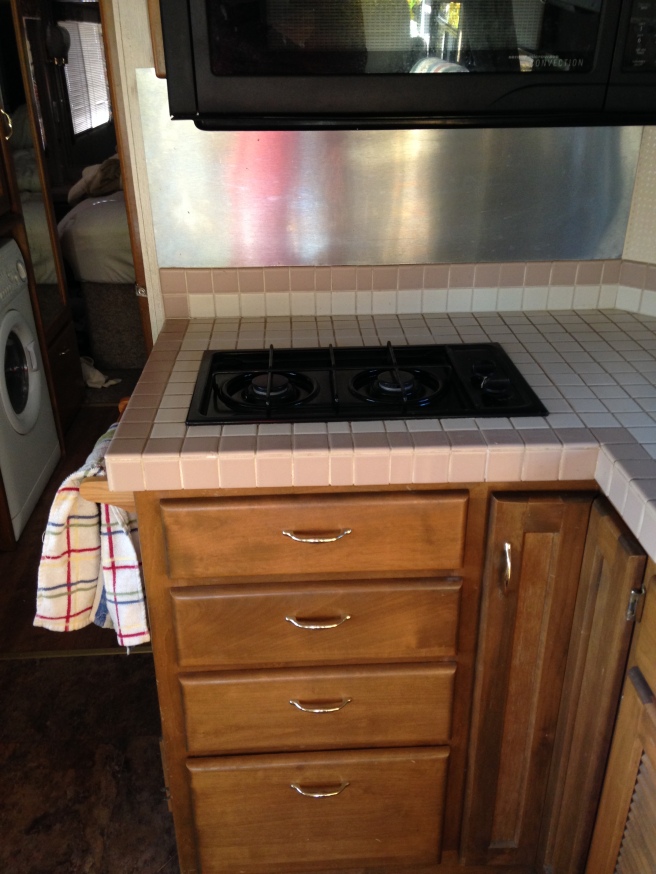 So Ken has taken out 3 drawers, moved them into one of the closets,…. 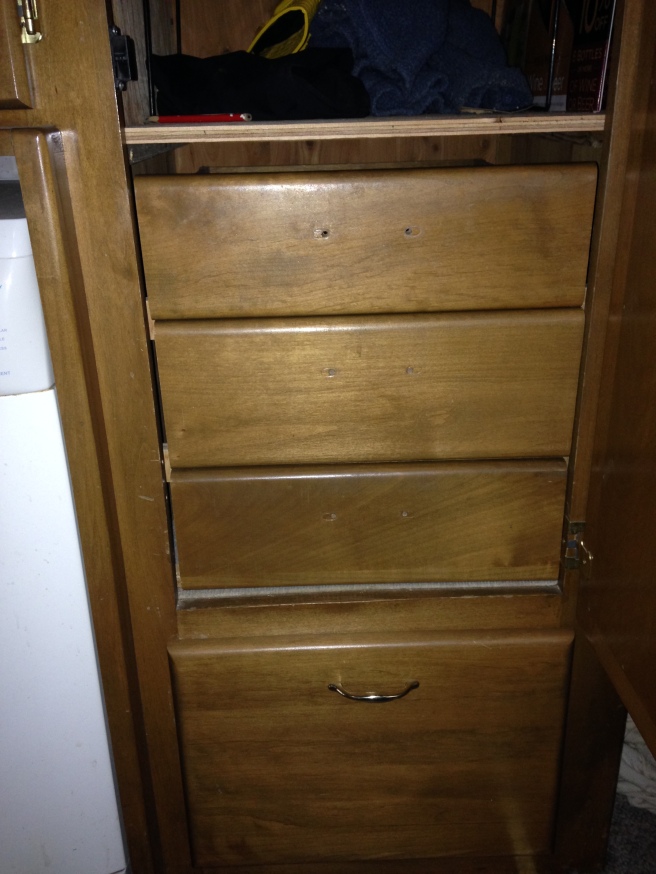 and installed this wonderful stove. We have decided we are going to try to make bread every day. 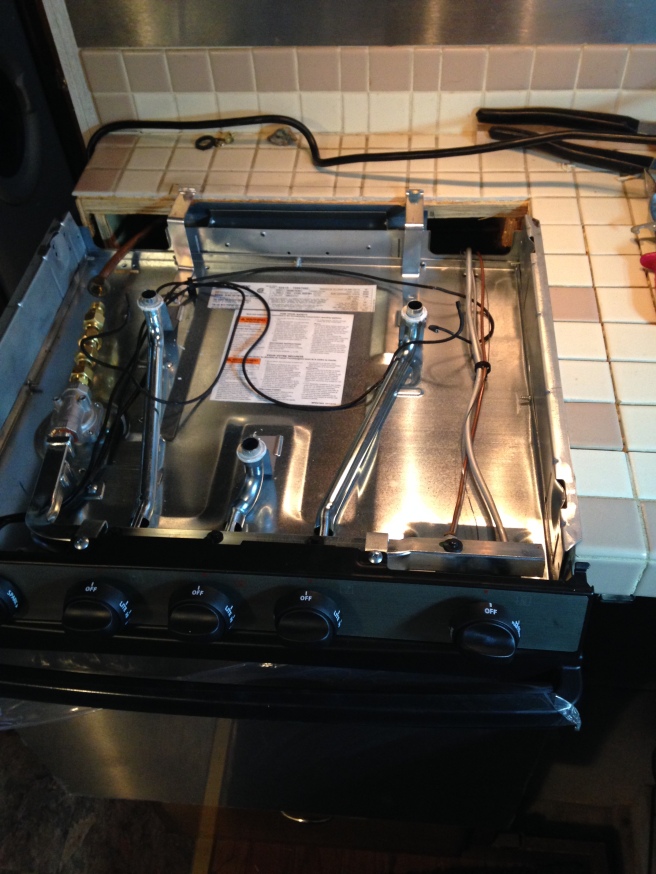 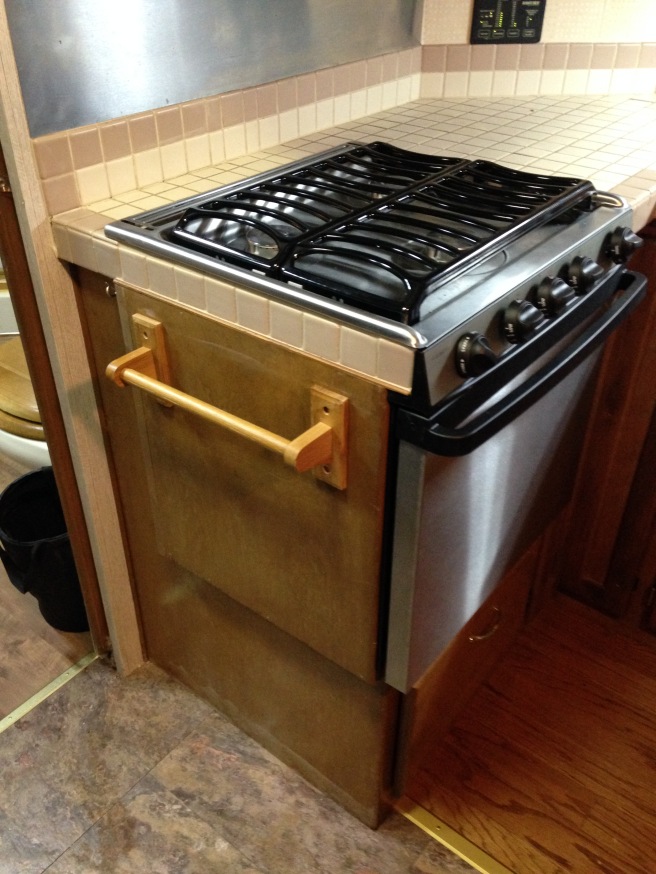 We buy our own grains locally, and have our own stone grinder, and have ground up several containers of local grain flour for over the winter. So we needed an oven.  We have this book teaching how to make a daily loaf of bread, in 5 minutes, so we will let you know how that goes.

We are now south of the border, and though we have lots of fruits and veggies we have preserved, we technically do not have any fruits or vegetables, which  from the research I have done is fine crossing borders. Preserved foods do not spread diseases.

Janet…. and Ken and Tucker