I decided to write a blog for Tucker. A friend suggested that dogs might be interested in what dogs are doing in Arizona with 2 rockhounding parents, in a motor home. Then I decided to add another important story.

Well to begin with, Tucker has more or less told us that he would rather chew his feet off than wear those F&)*)*&ing booties.  WE remind him about his booties as we pull the cactus thorns (spines) out of his feet. To his credit though, he HAS gotten a whole lot better at avoiding them.

He carefully places his front feet, and then gets the hind feet in the same (safe) spot.

He has a new problem however, and that is where he sticks his NOSE…..  In his diligent search for rabbits his nose goes down a fretfully large number of …HOLES… in the ground and getting spines stuck in his nose and mouth. It is quite a challenge getting them out of his tongue, and we even pulled one out that had gone all the way from outside his mouth through into the mouth.  We have now been at a spot where there are no Cacti. Will be staying for awhile. 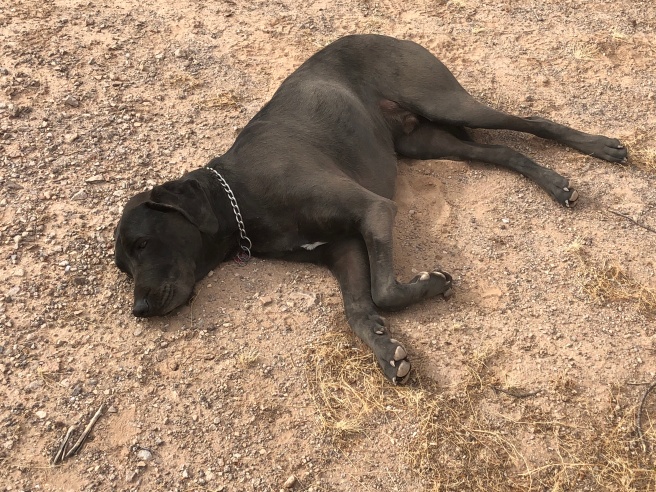 (HE just digs down into the dirt when we get home, rolls around in it, then lies down.)

The bikes have not worked out all that well with regards to Tucker either. He only has the stamina to go maybe 3-4 miles and then he is exhausted, but perhaps if we can keep him from running the 3-4 miles chasing rabbits, he might do better.  We are thinking of getting a bike trailer to haul him home in.

This first week of the year has been a very different time for me. It all started reading a post of a friend of my sons, asking how to change a persons Facebook page to memorial, as it is emotionally charging to get the birthday reminders of people who have died. (apparently it has to be the person who is in charge of the page)

Anyways it got me thinking about the people I have on Facebook who have died.  My thoughts then went to Other people who had died and I had a sudden brainstorm, in that Facebook might be a place to find someone whom I thought had died, but had no idea how to find her.

Back about 40 years…….. I had a very good friend named Maxine. We were both nurses in Williams Lake and both single. WE did a lot of great road trips, many adventures together.  Time went by, I went north and she went to Kamloops. We stayed in touch, in fact I remember her partner Don giving me a rough time because every paragraph in the letters I wrote started with “Well”

Well, Maxine was an incredible person. Just one of those people from my past that was truly wonderful.  A great friend.

Then many years went by, I got married, went back to university, had kids, moved to Chilliwack and then to Oregon.  WE DID LOSE TOUCH.

Then in January 2009, Ken and I were performing for a concert (up from Oregon) in Williams Lake at the recreation centre. After the concert a woman came up to me, saying that her name was Anne… and that we had worked as nurses together back in the late 70s in Williams Lake(I did remember her) , and she knew that I had been a friend of Maxine’s.  She went on to say that Maxine had recently been diagnosed with terminal cancer (Ovarian, I thought, turns out it was colon), and that she had been told to “get her affairs in order”. Anne said that she had moved up north to ?Smithers?.

It was a very brief meeting, with all that has to be done taking down after  a concert, it was late. I had not thought to get contact information (which I forever regretted)

It was a very busy week in our lives, we were dropping our son off at university and had to be back to Oregon. Thoughts of finding Maxine were put off.

It was quite ironic because within a few very short weeks, I was given the diagnosis with advanced endometrial cancer (not terminal necessarily) so underwent very aggressive treatment Surgey, chemo, radiation and then more chemo, and then…. the waiting around bit.

So essentially a year later, when life was no longer all about me, I guess I thought perhaps that with the significant diagnosis, that Maxine has succumbed to the disease. I thought about her a lot, but really lacked the knowledge of how to find someone you wanted to find.

Over the years I have often tried to find out about what had happened, doing internet searches, searching through nursing sites….

I did not find out until January 1st 2018. … I decided to do a Facebook search and there she was.  I had only started Facebook in 2008 and had never  expected Maxine to be there, but there she was. Anne was a friend of hers on Facebook , so I contacted Anne to find out what all had happened and got the story. ( I guess I wondered what would happen if you sent a friend request to someone who had died, if it was just be a painful reminder to the person she was with.)

Anyways, sadly Maxine died December 20 2010. She apparently took the diagnosis and decided to try to do everything she could to beat it. She did many natural things, trying to live healthier.  She apparently DID go through Chemo while up in Smithers, and from what I gather, we likely would have been doing it at the same time.

I am very sad that I found her so late, but still glad that I did find out about her.

I guess I wanted to share this story because I think we all have special people in our pasts. I was given a second chance to reconnect, but … I guess circumstances failed me….or I just did not try hard enough.

Don’t let those very special people get away from you…..