Quartzsite is our short term destination. It is in Arizona, just a few miles from the California border. It is at the crossroads of highway 10 and  HWY 95. The population is 3600 people and it is often the hottest place in the USA in the summer time.

The winter is when all the action takes place there though. The population at any one time in the winter is 250,000 and they get 1.5 million visitors a year.

The weather is one attraction, but there is no way a town that small can host that many people. The key is that there are hundreds of miles of flat BLM land surrounding Quartzite and the “boondocking” or dry camping capital of the US. As one guy at a solar place told us last year “the only place where someone spends 300,000 on a motor home to go camping for free in the desert.”  We have been boon docking for 6 weeks now and are not sure we want to camp alongside that many people, after all part of the reason we do this is for the wide open spaces we get.

Back to the OTHER reason we are attracted to QuartzSite….ROCKS.

Now is not the greatest time to be in Quartzite, so we just spent part of a day there and then left, there are a few rock shops open now, but the shows begin in January. THIS IS VARIETIES of quartz… I think.  HUGE.

During January, there are 3 major shows, that draw in sellers and buyers from all over the world.  Rocks and things made with rocks … jewellery and apparently many very unusual things. We have not been in Quartzite in January, so  will likely have much more to tell after we have been.  That and likely LOTS of pictures. What we hope to do is to learn more about the rocks we find, how to recognize them and how to work with them. We have some lapidary equipment at home, and each rock is dealt with a little differently. 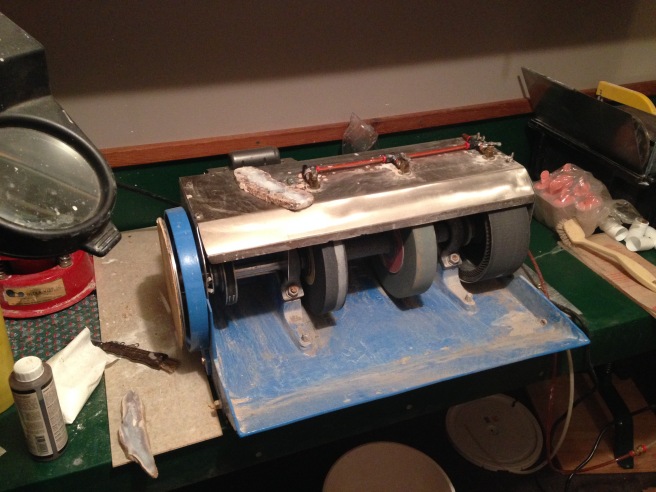 OH and I put this one in here for Tucker…. his goals are very different from ours. Imagine if HE was writing this blog. 🙂 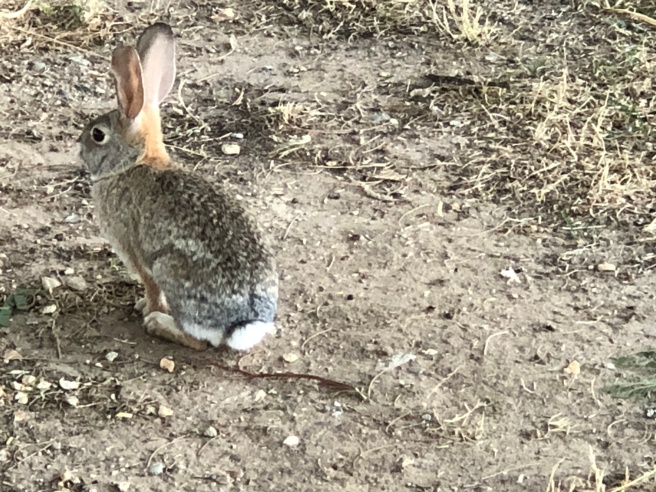 So for now, we left Quartzite and found some great places to camp 30 miles north east, with the plans to rent a car for a month, and camp out of town and travel in with the car.

We are thinking seriously about getting a tow vehicle, but it will be much more complicated and expensive getting one here, so we thought we would just get the rental for this year and decide when we get home, what to do.

I thought I would include a cute little story about our christmas day dinner.  Years ago when we first moved to Bandon Oregon, we had some friends over for supper and made something sort of fancy with Scallops.  The recipe was from a cooking light magazine and it was delicious.  I loved cooking light recipes and so over the years I collected the magazines and then the annual books.  I had them all. Finally they became an online entity, and eventually I was just looking up my recipes online so gave away all the books.

Well it turns out that you can no longer GET recipes from 1997 online. So Ken and I set out to try to remember all that was in that recipe. It is always funny how things come to you in the middle of the night. One night after letting Tucker out during the night he came back and said “Asparagus”…… and then ” I think there was asparagus in that recipe”. So we gradually pieced together that there was also lemon rind… and juice…..etc.

So we made the dinner for boxing day, and took all the pictures like they do on recipe blogs. So here it is.

First you roll the scallops in corn starch,  then heat  up olive oil in pan,  fry them for about 3 minutes on each side, then remove from pan.

Add 3/4 cup of white wine, then the lemon juice, rind, CHILI PUREE (we used 1/4 cup of our homemade tomato sauce)   and asparagus. x about 5 minutes, then add the scallops to the dish. Heat x 1 minute or so.

then serve over rice. 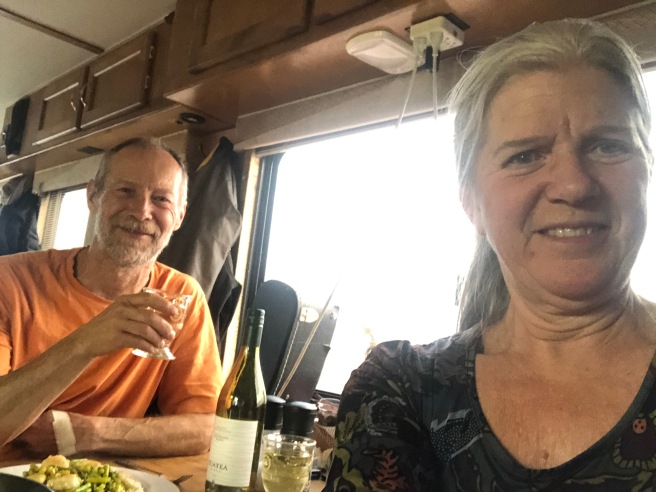 my lousy selfie…… I still feel that there might have been something else in the dish, but it was still great. Now if only I could find a 1997 cooking light magazine.

Much love and Happy New YEAR