We have spent a few days at different parts of KOFA national wildlife reserve.  It was established in 1939 to protect the desert bighorn sheep, following a campaign by the Arizona boy scouts. Major Burnham who was  a frontiersman, and become and conservationist observed that the populations of bighorn sheep were sharply declining and encouraged the boy scouts to take up the campaign.  For 2 years, 10,000 boy scouts  campaigned through a “save the bighorn” poster contest.  The name KOFA, was derived from an acronym of one of the areas most notable mines the King OF Arizona gold mine.  Oddly though, hunting IS allowed for the big horn sheep, but limited.

The mountain range although not particularly high, is extremely rugged, so provides excellent habitat for plant and animals adapted to the harsh desert climate. 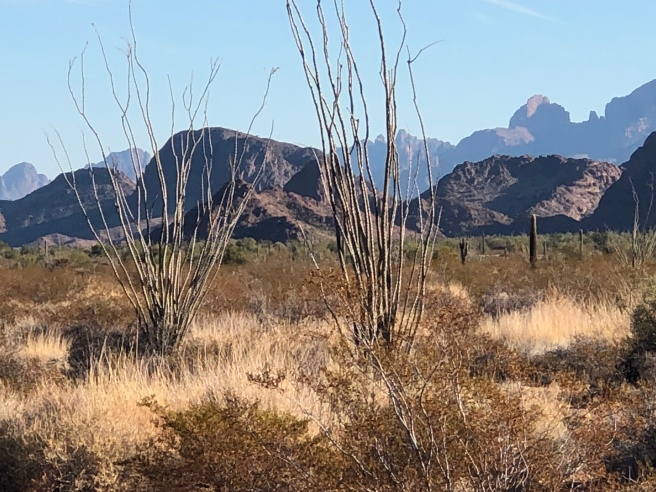 The larger mammals like the bighorn sheep and mule deer find refuge from the heat in the caves. We did not actually see any wildlife, as we stayed outside the refuge with the road looking a little much for our rig.  The closest we came was Tucker found a shell of a tortoise.  Looks like a piece of paper in front of him…

These area are all close to each other, Brenda, Quartzite Blythe. While hiking around Brenda, we were hearing VERY loud sounds…. ….. Guessing we thought they sounded like thunder, or the sound a jet makes when it overcomes the speed of sound (sonic boom).  We just did not get what these sounds were. We thought we might come over the next ridge to see that a huge bomb had been dropped.

We put it all together yesterday, hearing these sounds again, realizing that they actually DO test bombs at Yuma proving grounds, which is adjacent to the KOFA wildlife reserve.

Interesting bedfellows?  The first area we camped alongside the KOFA mountain range, we had to travel 5 miles along a road going through the proving grounds. 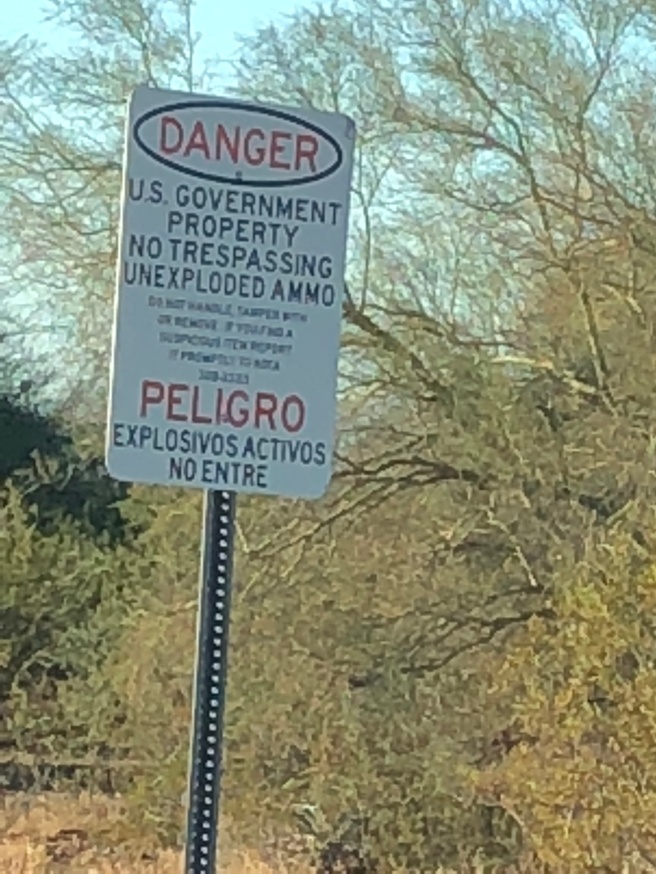 I did not get a picture of the sign as you start into this. It basically said that you were not allowed to stop for any reason over the next 5 miles, as it was military property.  Driving south from Quartzite to Yuma, there was a figure in the air that you could see for at least 40 miles in each direction.  When we stopped to camp for the night we looked up and OMG, of all the places we could have chosen to camp for the night, we were directly below it. Tucker looked up and barked at it. Ken looked with binoculars and it is attached by cables and the whole lower part of it is cameras…… hmmmm

Yuma Proving Ground (YPG) is a United States Army facility and one of the largest military installations in the world. Situated in southwestern La Pas county and western  in southwestern Yuma county approximately the proving ground REALLY IS used  for testing military equipment.  And here I thought we would be safe by avoiding malls and theatres.

In a typical year, over 500,000 artillery, mortar, and missile rounds are fired, 36,000 parachute drops take place, 200,000 miles (320,000 km) are driven on military vehicles, and over 4000 air sorties are flown from the proving ground’s Laguna military airfield. Though about 90 percent of the proving ground’s workload is devoted to the test and evaluation of weapon systems and munitions, training activities are important. Dozens of units visit the proving ground each year for realistic desert training, especially before deploying overseas.

With regards to the blimp, I found this information. We had thought it was to do with Yuma Proving ground, but turns out it is more about border surveillance.

“For the past two decades, a large aerostat balloon maintained by the U.S. Air Force has rivaled Castle Dome as a fixed point of reference over the southern portion of YPG’s range.
Providing an important link in the “radar fence” along the international border that detects drug-smuggling airplanes, the same principle has been applied to supporting American forces in Iraq and Afghanistan.

For nearly a year, motorists traveling the isolated stretch of Highway 95 that passes through the northern-most section of Yuma Proving Ground have been treated to the site of several more white blimps floating high above the desert floor. They look quaint and placid as they hover, but these dirigibles are being rigorously prepared for action overseas.

Persistent Ground Surveillance Systems (PGSS) marry the most cutting-edge, high-tech detection sensors to an inexpensive platform: an ordinary blimp. The moored lighter-than-air craft float as high as 3,000 feet above the ground, lofting a sensor suite that allows ground controllers to continuously monitor a huge swath of land.”

Which would explain the ever apparent border patrol vehicles. 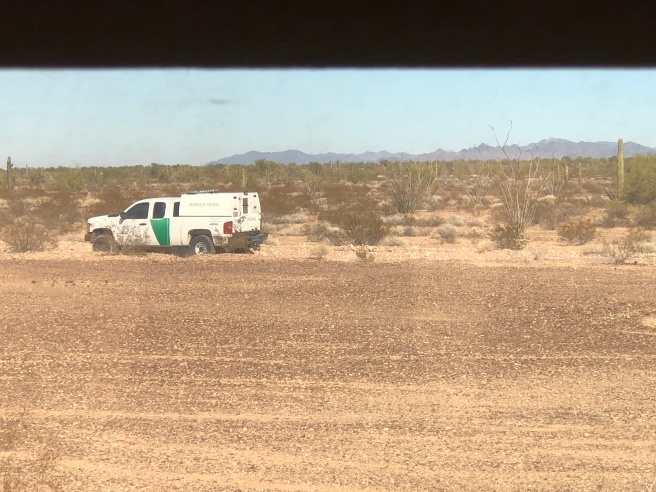 Ken and I were looking for a certain rock site 2.5 miles south of ” STONE CABIN”, and the directions in the book were a little vague, so I drove the car back up to get my bearings from STONE CABIN and had to go through a border patrol  inspection site, complete with dogs etc.  This site is permanent between Yuma and Quartzite.  I was wondering what they thought about us going back and forth through the site …… looking for a rock site.

Although I do not believe my photos do it justice, these mountains are the most spectacular that we have seen on this trip.

AND then the kitchen sink drain started to leak…..

…. and one more BRAND NEW part to our motor home, gradually we are getting a new motorhome.

MUCH LOVE TO ALL