We are now in central Oregon, heading south.  With the snowing in the passes in  BC at the beginning of November, we opted to avoid passes and head directly south, through central Washington down to central Oregon.

My car, the electric car, is currently traveling around BC without me.  I work in Kamloops, live in scotch creek and have an hours drive to work. On my very last day of driving in to work this year, I hit a deer on the 4 lane, HWY 1. Not sure if the deer survived, but left the scene. The right front end was crunched in, and the car was UN drivable because the wheel well was down wrapped around the right front tire. 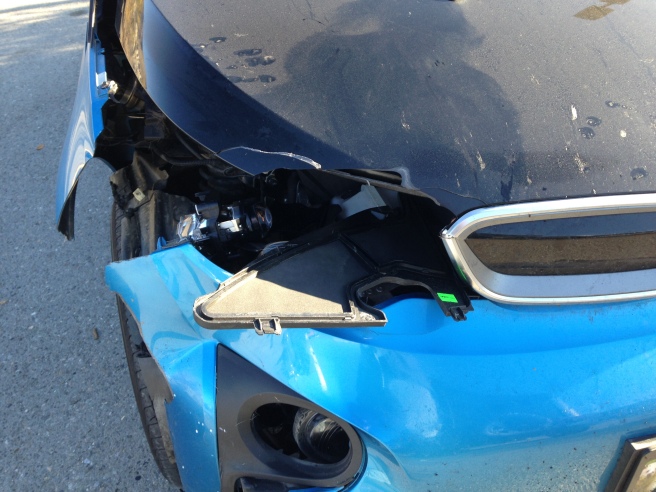 Not having been in an accident I was at a bit of a loss in dealing with ICBC (british columbia’s Govt insurance).  SO the car sat in Kamloops for a few days, due to my inexperience with insurance companies. I was told that  they would only tow the car to the closest town (Kamloops), despite my information that there was no places in Kamloops that work on BMW cars.

So we used our BCAA insurance to have the car towed to Kelowna to a place that IS BMW certified. I made it VERY VERY clear that this was an electric car.  She assured me that YES they work on all BMWs.  So then we are driving along the Columbia river  when we got a message from the car repair place in Kelowna to say that they, turns out, cannot work on an electric car. Apparently there are special tools, AND specially trained technicians to deal with the batteries.

So there we were thinking that we had used up our BCAA free ride and were going to get stuck with a huge bill to get the car to Vancouver. Then we found out a little known thing about auto insurance that I wanted to share with you all.  Auto insurance companies guarantee to fix your car. If for some reason your car cannot be fixed in the closest town, it is their responsibility to tow it to where it can be fixed (for me it is Vancouver)

So the car is sitting in Kelowna, turns out they had taken it apart and not put it back together for the tow, so it will likely not get to vancouver until late next week.  This is good for us, because we have no idea how we will get it back to Scotch Creek when it IS fixed.

So in the meantime, we have gone MINING………

NOW this is a kind of rockhounding that you can really get IN TO…. THUNDEREGGS. Oregon’s STATE rock.

They lie just under the surface, so you have to get a bit DIRTY… as you can see, I really get into my work. 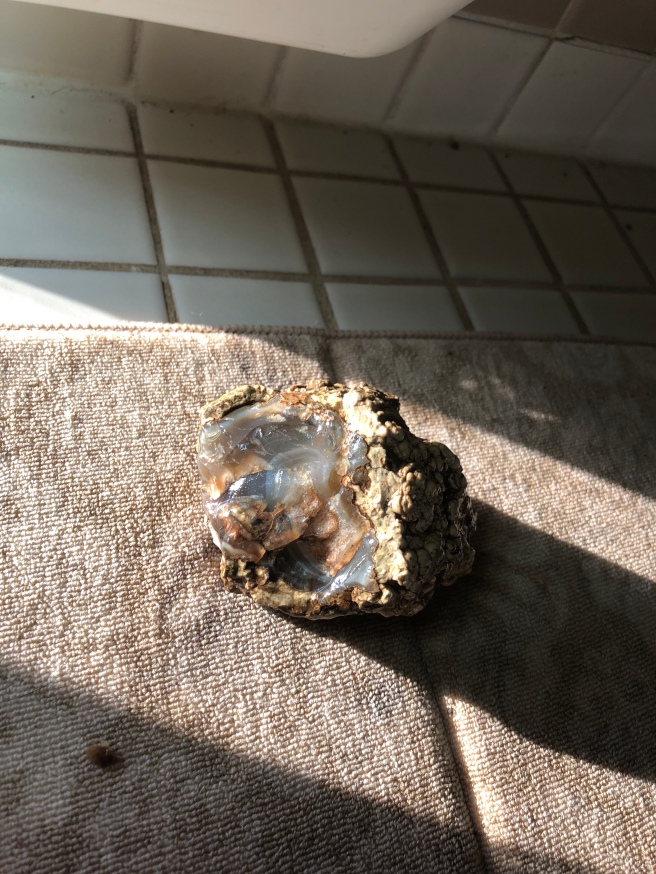 A thunder egg is essentially an agate (or jasper) inside a volcanic rock shell.  We were staying in Prineville, OR, which is the rockhounding centre of central Oregon. Beautiful forests, sadly many of them burned last summer.  It is

We are managing to get way further in our side trips because we now have a jeep we are towing. We are just leaving the motorhome in one place and driving to other destinations with the jeep. MUCH better on the motorhome, not having to 4×4 anymore 🙂

We are actually today in North eastern California, hoping we can get through MEDOC forest today.

Bye for now, much love to all.
janet