We moved further south a week or so ago. We have this wonderful book called “collecting agates and jaspers of North American”, by Patti Polk. I fell in love with one rock she has a picture of, that she claims, comes from the Muggins mountains. Unfortunately Muggins mountain is not mentioned in any of my rock hounding books. So I took to google to find out more information to find this. 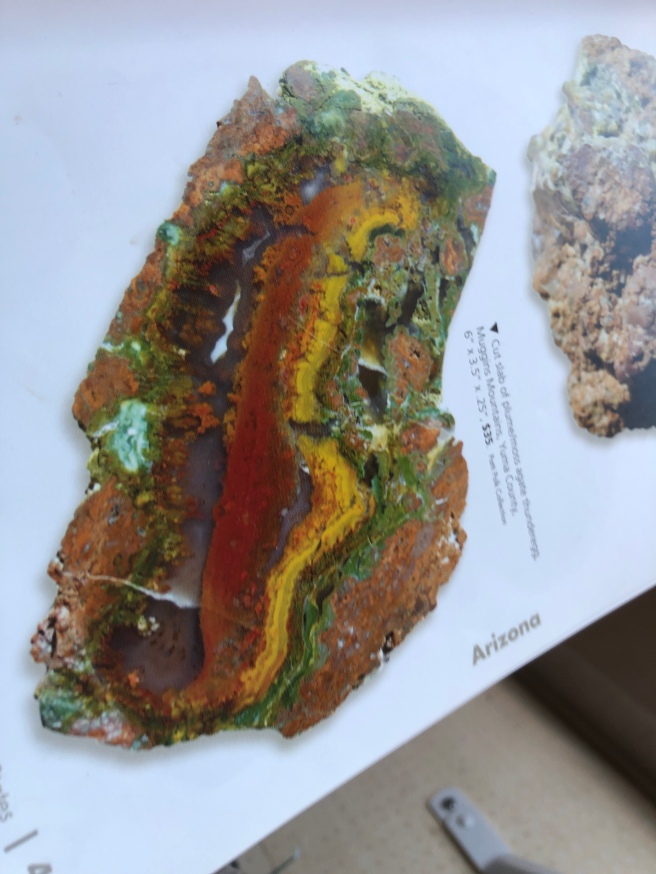 It took a lot of guess work to FIND THE SPOT….. but we got as close as we could with the jeep, then walked in.

So it was a wild ride in and parts of it Tucker and I got out and walked. He is not buckled in and so he tends to struggle when we rock and roll. The very clever Tucker has figured out that if he sits on the console and faces backwards that he does not get shaken up as much. 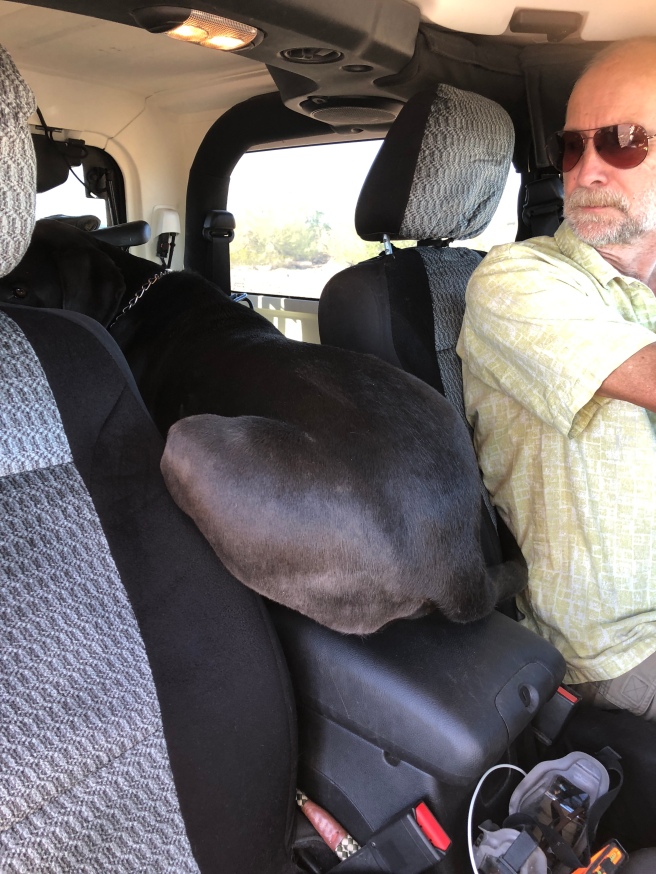 Not sure what a muggin is?   but the landscape looks like it could be on the moon.

Unusual rock formations.  We did find some rocks that could be like the picture shown in the book, but we need to cut them to show what they look like inside.

The VERY best part of the day, is that we came across a friend for Tucker.  For the most part, we never run into anyone when we are rock hounding and we never run into hounds either. so what a very special day.  Tucker had a very fun romp with this chocolate lab, named Fury.  Looked just like Stella, a now departed dog of our friends, Irene and Paul. 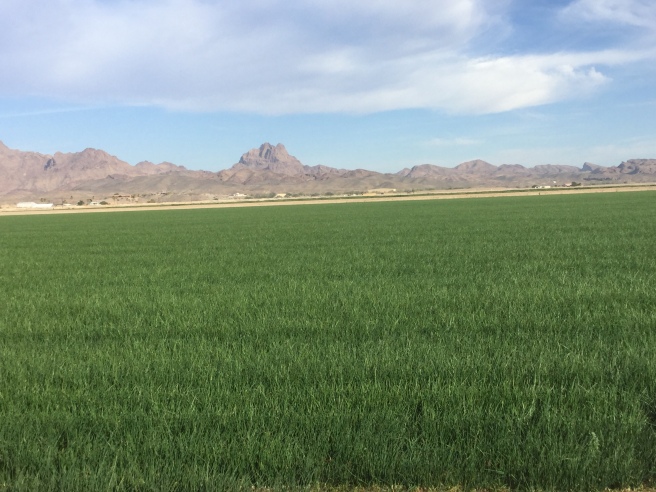 The area around Yuma is very flat and with extensive vegetable farming. Scallions above, and ? broccoli below. Looks much healthier than my veggies looked last summer.  We are currently quite near to the Gulf of California, and we have watched some storms developing south and west of us, which never seem to hit Yuma.

Yuma only gets 3 inches of rain a year, and the incredible agriculture system was only made possible with construction of the first dam on the Colorado and completion of the Yuma Siphon – delivering water through a huge tunnel built under the riverbed – in 1912, the same year Arizona became a state.

“Now, of the 230,000 acres of land utilized for agriculture in Yuma County, 100 per cent are irrigated with Colorado River water delivered by one of the county’s seven irrigation districts. Every single field in the county is also laser-leveled and graded using GPS technology, making Yuma’s irrigation network one of the most efficient in the world.”

We had noticed how incredibly TIDY all the fields were, makes sense that they are all level.

ANOTHER irrigation canal, the All American Canal is a place we went rock hunting at. It is north 30 miles or so from Yuma.

The All-American Canal is an 80-mile (130 km) long aqueduct, located in southeastern California. It conveys water from the Colorado river into the Imperial valley and to nine cities. It is the Imperial Valley’s only water source, and replaced the Alamo Canal which was located mostly in Mexico. These canal systems irrigate up to 630,000 acres (250,000 ha) of crop land and have made possible a greatly increased crop yield in this area, originally one of the driest on earth. It is the largest irrigation canal in the world.

The OTHER interesting thing about the canal is that “The All American Canal runs parallel to the Mexico California border for several miles. With over 500 people having drowned in the canal since its completion, it has been called “the Most Dangerous Body of Water in the U.S.”

So the areas we were directed (by the book) to find rocks were the large piles of “earth” you can see on either side of the canal, according to the book, these piles were made by the earth they removed 70 years ago to create the canal.  However to look at these piles there was no growth on them …. PLUS we found nothing there….🤔🤔 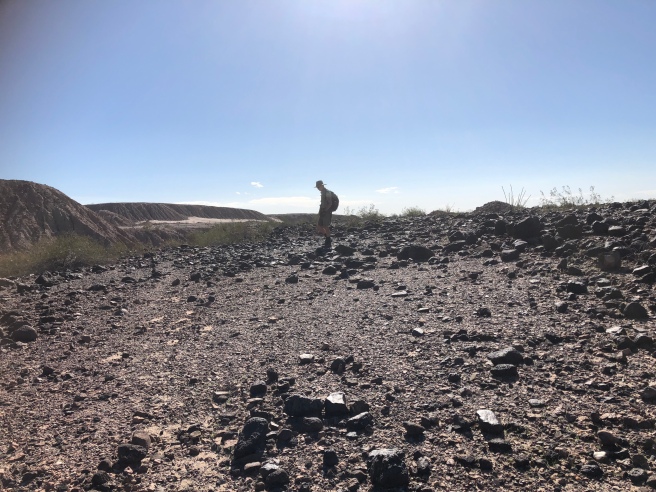 I wandered further back and found an area that looked like it could have been there 70 years and we found LOTS Of cool agates and Jasper. So what I figured out, is that they MUST have to dredge the canal to maintain its depth over time. The piles you can see in the forefront of the pictures of the canal, MUST be the silt that they dig out of the canal, much more recently that 70 years ago.  SOOOOO back to google. What I did find was that the water from the colorado river is extremely high in silt, and there is an extremely complex procedure the get rid of the silt (at the imperial dam) . I found this great slideshow to illustrate the process….  slideshow of the imperial dam/all american canal

But apparently even with this whole process, they do still need to dredge the all american  canal about every 7 years, and I am certain that that is what the piles of earth were alongside the canal. In the slideshow (link above) there are some pretty cool pictures of the construction of the canal.

I find that our quest for rocks gets us into some very interesting areas, often much more interesting than the rocks themselves. 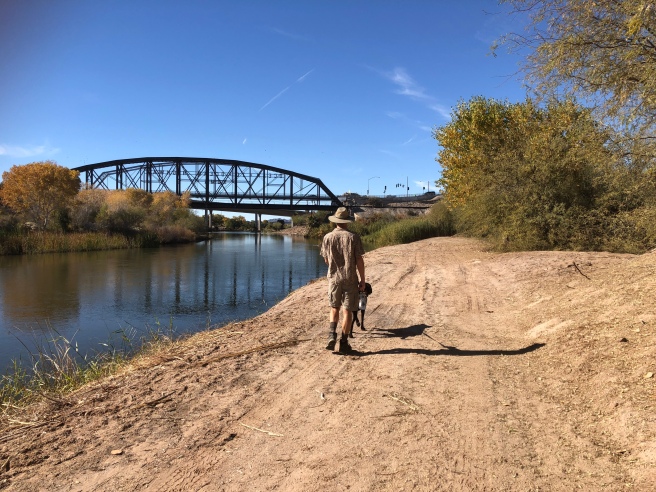 I find that wherever we go we find things that are very interesting. Every place is different and things like the whole water system likely seem pretty HOHUM to the locals, is fascinating to us. I am sure there are some HOHUM things about where I live that would be fascinating to others.

Much love and thanks for following our travels, and happy New Year

Janet…. and Ken and Tucker.