We are currently staying at the Salton Sea, which is a shallow, saline endorheic rift lake that sits right on top of the San Andreas fault.   The lake sits on the lowest part of the Salton sink, which is the result of the actions of the San Andreas fault and the East pacific rise. A larger version of the Salton Sea,  Lake Cahuilla existed from 20,500 years to 3000 years ago. Apparently Indio would have been underwater then. It is felt from high water lines that the basin filled many times over thousands of years, creating a lake 105 miles in length and 300 feet deep.  From this picture  you can see where the salton sea sits in the basin and the faint blue waterway to the very right of the picture is the Colorado river.  The light green part is where the lake once extended to.

The cycle of filling has been repeated many times, most recently, an accident by the California Development Company. In 1905, in an effort to increase flow of water into the area for farming, irrigation canals were dug from the Colorado river to the valley ( mentioned in the previous blog about the All american  Canal and the Yuma syphon). The colorado river is very high in silt (which is what made the valley so fertile in the first place), and they made a cut in the bank of the Colorado river (dynamite). That action overwhelmed the canal, (the river was very high that year as well) and the river flowed directly into the Salton basin for 2 years, creating the sea which is there now.

It should be noted that an interesting note from explorers, …….the earliest ones found it and then after 1540 they did not 🤔🤔🤔  “For three centuries or more, from 1540 to 1902, the Salton Sink was a hot, and arid desert. Neither Melchior Diaz, a Spanish explorer in the service of Cortes who visited it in 1540, nor Juan Bautista de Anza, who crossed it in 1774, saw anything like a body of water. The only evidence that the Colorado River ran into the Sink within that fame span was a so called Roque map, now in the British Museum, which was compiled from all sources of information which were in existence in 1762. This map shows a considerable body of water in the Salton Sink, with the Colorado River flowing into it, but no written account accompanies the map.” 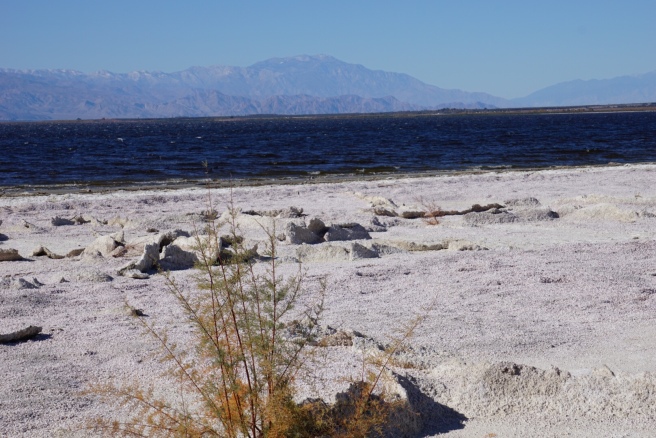 I should also note here that at one time, the salton sea was part of the gulf of California, there are tales of sunken ships found out in this desert. ( which according to my estimates would be under this sea)🤔🤔🤔.

So why is it so salty?  Its salinity is greater than the pacific ocean, and sadly increases by 3% per year because it has inflow from 3 sources, but no outflow, just evaporation.  Beneath the lake is a salt mine… In the late 1800s, 1885 to be exact, the New Liverpool salt company was formed, and “harvested” 700 tons/ day of the “white gold”.   At the time the “crop” sold for between 6 -34 dollars a ton.  So Mr Durbrow the owner, became quite wealthy, (for a time) and there were many buildings and homes at the site of the mine, which all became underwater when the area flooded in 1905-1907.  Interesting side note that Mr Durbrow also lost his home in the fire and earthquake in San Francisco in 1906. The railroad also became underwater.

So the “beach” we are walking on, is ankle deep in what appears to be shells, and old life forms, HOWEVER I found out the real story behind these “barnacles” 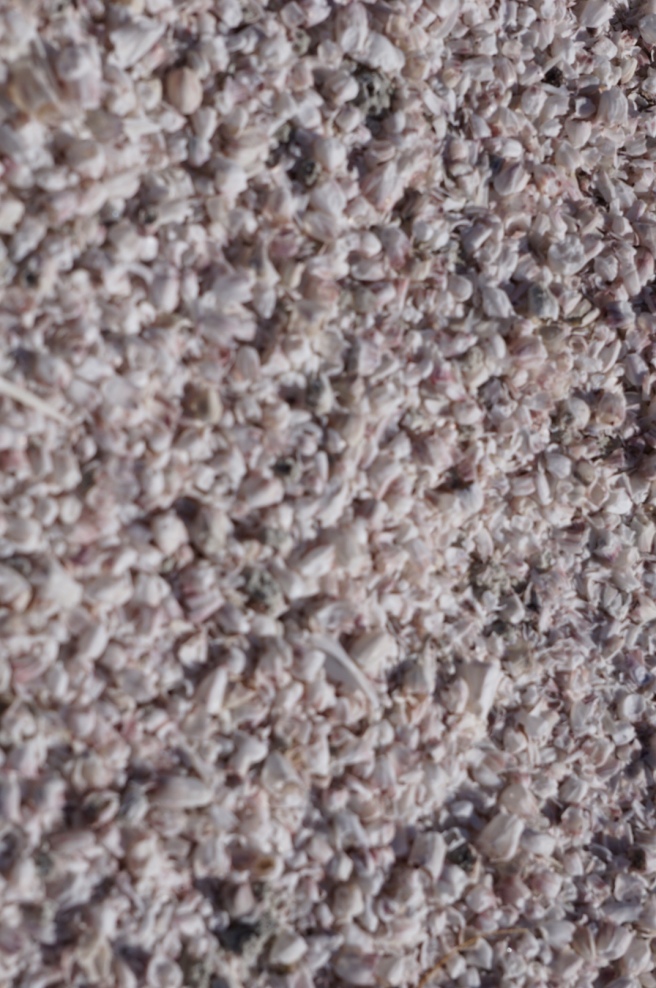 The Salton Sea also has a military history ….OF COURSE…. Starting in 1940, they had an Air force station, where they did sea plane training, and also “Additional activities at the base included experimental testing of solid-fuel plane-launched rockets, jet-assist take-off testing, aeroballistic testing of inert atomic weapon test units at land and marine target areas, training bombing at marine targets, testing of the effects of long-term storage on atomic weapons, testing of the Project Mercury space capsule parachute landing systems, parachute training and testing, and military training exercises.” 🙄🙄  SO BACK TO THE BARNACLES….. How did they get there?  Well the military brought in Ships to the Salton sea, which had barnacles on them, and they thrived in the Salton Sea.  We found that the barnacles were very different from the ones you might find on an ocean beach, much softer with thinner side walls.  SO none of this is sand, it is all barnacles.

This area is so interesting, I have decided to make it into 2 blogs…… so stay tuned for Salton sea part 2.

Much love to all, and happy new year.